Culturally appreciative visitors can admire countless items of historical interest gathered from all over the valley, painting a colourful picture of the traditional life-style of the Montafon. 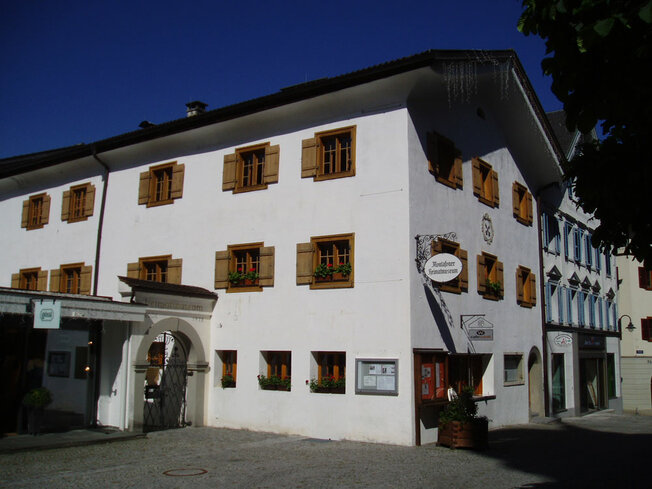 A first-class collection of folkloristic and traditional items

The Montafon Folklore Museum in Schruns is one of the oldest museums of its type in the entire Alps. As early as 1906 a motivated group of people began collecting artefacts and traditional items of potential interest. Since 1978 this collection has been housed in the former mountain judge’s residence in Church Square, a building dating from the late Middle Ages, with later additions.

The vestibule on the ground floor houses an exhibition of iconic local items, including a traditional Montafon table, a Hans Bertles ski poster and a picture of group of Montafon emigrants taken before their departure to America. Next, on the mezzanine floor, you can view an old classroom from the school at Tschagguns-Bitschweil, which was closed down in 1963.The adjoining lean-to houses a collection of agricultural implements and an old mountain dairy.

The vaulted cellar is home to various traditional workshops and a forge for the production of hammers. On the first floor, a collection of original costumes and a number of pictures introduce visitors to the history and development of the traditional  Montafon regional dress.

Also on this floor is a valuable collection featuring prime examples of local domestic craftsmanship, such as a richly carved linen chest dating back to 1793. In the older section of the first floor the visitor can experience just how the Montafon people traditionally lived and worked: the old kitchen smoke house, the sewing room, two bedrooms and the old parlour dating back to 1784. The weaving room is testimony to the early establishment of textile production in the valley.

Further information regarding opening times and prices is available at www.montafoner-museen.at